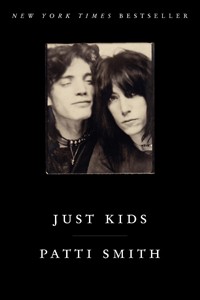 I read a couple of articles yesterday speculating on which actors are vying to play the roles of Patti Smith and Robert Mapplethorpe in the movie adaptation of Patti Smith’s memoir, Just Kids. The memoir itself is great, and I think Smith did a wonderful job writing it. But what will the movie be like?

Both articles I read mentioned Kristen Stewart and James Franco specifically as actors who might play the lead roles. And no one, it seems, is happy about this. One commenter said they would prefer lesser knowns to play the roles. Another commenter said they didn’t want to see a Twilight version of Patti Smith’s memoir. I should emphasize the fact that these are rumors, and nothing’s been confirmed. That means there is still a chance that we, as movie-goers, could have some say in the decision.

I believe the concern about these casting decisions is valid. One of the first big memoir to movie adaptations was Girl, Interrupted, which came out in 1999. I think Winona Ryder and Angelina Jolie each did a really good job in their respective roles as Susanna and Lisa, but because they’re so recognizable, it was difficult for me to get lost in the characters. It would be even harder for me to forget that I was watching Kristen Stewart and James Franco as Patti Smith and Robert Mapplethorpe.

But can a big studio film ever really stay true to a memoir’s intentions when it comes to casting decisions? I understand these decisions are about marketing, and generally speaking the screenwriter has little say in who gets cast. I still wish that they would take more chances on lesser known actors for these kinds of projects. Or, at the very least, choose two well-known actors who will better embody the characters they’re playing. I just don’t see Kristen Stewart as Patti Smith or James Franco as Robert Mapplethorpe.

Since Patti Smith will be involved in writing the screenplay for Just Kids, I think there’s a good chance it will capture her story. She might not, however, get much of a choice in casting. I agree with the commenter who suggested getting lesser known actors to play these legendary icons so we can focus on the story, not the fandom. What do you think?