Nightmares in the Realm of Dreams 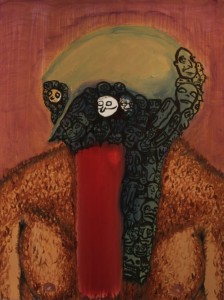 The gross, the disgusting, the horrific. Why would anyone care to dwell and create in these abject realms? The world we live in is obsessed with beauty and perfection. We struggle and strive to attain an almost transcendent impossibility, and that is what’s admired in artistic expression.

Yet for those who create art, the dirty side of things can be just as alluring and difficult to capture. As an artist who considers those murky waters his domain, I can attest to both their draw and their own kind of beauty.

To capture the perfect flabby back or hairy crotch (replete with scabies and pustules) is one that requires the artistic execution of finite details and an intricate understanding of the numerous bumps and uglies the human body can be plagued with. Illustrating a death scene, complete with the blood spattered and pooled, necessitates a comprehension of fluid dynamics and abstract patterning. 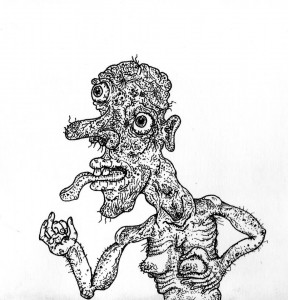 These are just a few examples of the complexities hidden in the world of the abject. To be repulsed by a work of art is to be affected by it; the fact that someone could put ink to paper and elicit such strong emotions is nothing short of incredible. It’s more than seeing a curse word scrawled on a bathroom stall; it’s more than a man whipping out his dick on the bus; it’s a creative exercise and performance that expounds upon an area most people would shudder to even think about for more than a few seconds.

It inhabits that place in order to communicate something. There are serious problems in this world, in the hearts and minds of humanity, and in ourselves. We love to hush these away, or do the exact opposite and create a big to-do before forgetting about it all over again. 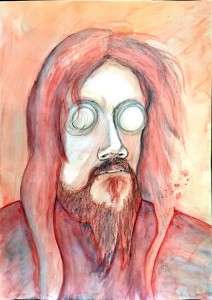 Life is too short to dwell, but some of us must dwell. For we act as a mirror, a conscience of sorts, for society, culture, and ourselves. We need to see everything for what it is. Often people decry violent and sexual media for being vapid and dangerous, yet at the same time, millions consume it. Art is not creating the violence, nor promoting it; it is both reflecting it and creating something new with that reflection.

Art, in its purest sense, is much like the realm of dreams: and we occasionally have nightmares.

Pj Kneisel’s art work is about the contradictions between the macabre and the comic, and thus serves to exhibit the eternal dichotomy of both abhorrence and enjoyment of the human condition. He lives in Los Angeles and is a co-founder of Aorta VI and The Baby Suns art collectives. You can visit his website at pjkneisel.com and follow him on Twitter @hobbesdream.