The Surprisingly Difficult Art of Revision 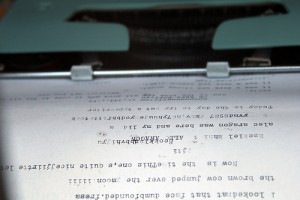 I’m writing to you from deep within the revision trenches. My contemporary YA novel is getting a major rewrite, to the point where only about 5-10% of the original material is making the cut in the new version.

This revision has been so consuming that I haven’t allotted time for much else, including blogging. Now that I’m at the halfway point of the manuscript, I have to say that real, overhauling revision is an art. And it’s surprisingly hard.

So much emphasis is put on simply getting down the first draft that few writers are prepared for the realities of what it takes to finish a manuscript that will hook an agent or do well in the indie publishing realm. I certainly wasn’t. I’ve revised projects before, but never quite like this. I’ve never started over from scratch, keeping only the skeleton of an idea I’d already written a complete draft of and majorly revised several times.

At first, I was very resistant to the idea of rewriting the entire book. I’d grown so attached to the novel as it was, to its idiosyncrasies, charms, and even its shortcomings, that it was hard to imagine throwing it all away – the good and the bad – for the sake of telling a better overall story.

There was a certain excitement and optimism at first, especially with the brand new opening chapter. But once I got to the material I’d already written, it was so difficult not to want to take short cuts and simply copy and paste it the original over. Every time I tried, I could sense that it was almost always the weakest material in comparison to the new writing, and I ended up having to throw it away once again.

I hit a major slump a few chapters in, unsure if I even liked or cared about this novel anymore. It seemed like so much work on top of an already amazingly huge amount of work. I forced myself to keep trudging on, trying to believe that I was ultimately working toward a much stronger and more powerful novel.

While it’s easy to believe that great works of writing simply fall out of an author’s mind, the truth is rarely that simple. Most writers spend years on their work, writing and rewriting, receiving critique and revising. As much as I’d hoped I’d nail it on my first try, I’m no exception. It’s difficult, time-consuming work with no immediate rewards or encouragement. But I can already see how much stronger this new draft is compared to the original, and I hope to come out on the other side with a novel that is ready for an agent.

A big shout-out to the PitchWars competition for lighting a fire under me and offering me the encouragement and guidance I desperately needed to make this novel a worthwhile project. My unofficial mentors, Rachel Lynn Solomon and Wendy Spinale, have been so helpful and gracious. I wouldn’t be doing this without their help, or the support and feedback of my number one beta reader and boyfriend, Pj.

photo credit: “Today is the day to try out a typewriter” via photopin (license)

4 replies to “The Surprisingly Difficult Art of Revision”